The 2019 Harbin Classic ended in a squeaker with a 35-34 victory by the home team. The faculty (the home team), edged out the visitors (the students) in the closest and most gripping game in years.

The annual Roswell High School Faculty-vs-Students basketball game is the kick-off to spring break, and is named in memory of Charles Harbin, III.  Mr. Harbin (aka Mr. Harbs) was the uniquely popular RHS teacher who galvanized students’ interest in English literature as a teacher, soccer as a coach, and enjoying a life well-lived as an exemplar.

The game was a nail biter, with the teachers battling for the lead and pulling ahead in the opening quarter.  An excited student prophetically yelled, “The old guys are going crazy!”

By the second quarter victory seemed likely at 22-17, until the students fought back. Their strong play combined with Principal Shaw’s help with a surprise goal for the students (when he dunked the ball in the wrong basket) had the crowd roaring as the faculty lead started to slip away.

Hoops, They Did It Again!

However, in the final quarter the faculty pushed through matching the students goal for goal, and pulled out a win, just a single point from a tie. Their first win since 2015.

After the game Charles’ family threw souvenir basketballs out to students in the stands to wish them a fun spring break. Shortly after they return to classes, the Harbin Classic trophy will be on display at Roswell High School. 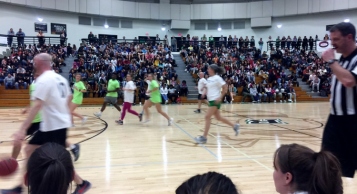 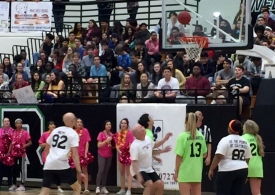